Sankisa (Skt. Sāṃkāśya; T. lha bab gnas ལྷ་བབ་གནས་) is a village in the Indian state of Uttar Pradesh, about 300 km east of Delhi, and four hours drive east of Sarnath. It is one of the eight pilgrimage sites, and is where the Buddha descended from the god realm of Tushita.

Some time after his enlightenment the Buddha went to Tushita to teach his mother. When he was about to return to this world, Indra and Brahma manifested three stairs of 80,000 yojanas each reaching this world in Sankisa. As the Buddha walked down the central one, they accompanied him to his left and right carrying umbrellas to honour him. This miracle is represented by the Descent from Tushita Heaven Stupas, one of the eight kinds of stupa.[1]

A Pillar of Ashoka at Sankisa. 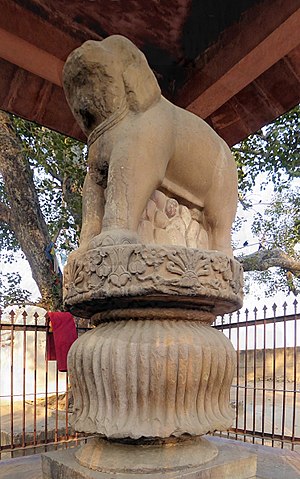