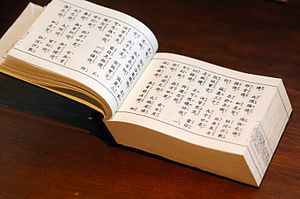 The Shorter Sukhāvatīvyūha Sūtra is one of the two Indian Mahayana sutras that describe Sukhavati, the pure land of Amitābha. This text is highly influential in East Asian Buddhism, including China, Korea, Japan, and Vietnam. This text is revered by the Jōdo Shinshū, one of Japan's largest Buddhist congregations.

The Shorter Sukhāvatīvyūha Sūtra was translated from Sanskrit into Classical Chinese by Tripiṭaka master Kumārajīva in 402, but may have existed in India as early as the year 100 in a Prakrit.[1]

The bulk of the Shorter Sukhāvatīvyūha Sūtra, considerably shorter than other Pure Land sutras, consists of a discourse which Gautama Buddha gave at Jetavana in Śrāvastī to his disciple Śāriputra. The talk concerned the wondrous adornments that await the righteous in the western pure land of Sukhāvatī as well as the beings that reside there, including the buddha Amitābha. The text also describes what one must do to be reborn there.